Banking on a better future: Collaborative climate engagement with the banking sector

Effective engagement with banks by universities and colleges can change the world that students graduate into.

Banks are the largest single source of new financing to fossil fuel expansion, and universities have real negotiating power as clients of major banks. Working through the Responsible Investment Network – Universities and peer networks, our bank engagements focussed on financing for new fossil fuel infrastructure, to prevent further long-term commitments to fossil fuels.

Our engagement helped a major global bank include methane in their methodology, and to report on absolute emissions.

What the Judges Thought

The judges were incredibly impressed with the quality of this initiative. The bar was certainly raised when it comes to this application. Innovative, Exceptional and Sector Changing were words used to describe the work being done. We were impressed by the use of 'fame', credibility and weight in the sector to really drive positive social, economic and environmental change that will support not just those in Cambridge, but potentially across the globe. This initiative is leading the way and we cannot wait to see the change they create using money for good.

What it Means to Win

“Banks have a key role to play in the energy transition. Our historic relationship with major banks, combined with our academic expertise, puts the University of Cambridge in a strong position to influence finance towards net zero goals. This award will help us share this approach with other institutions.”

Anthony Odgers, Chief Financial Officer of the University of Cambridge

(The Vice Chancellor who supported this work has recently stepped down, and we are in transition to an acting VC.) 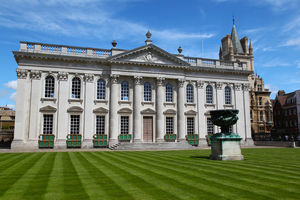